I have/had vagus nerve issues. Food poisoning led to severe vomiting and then atrial fib. A cardiologist mentioned that the trauma and force of the vomiting threw me into afib.

About two months later I began having a sense of something stuck in my throat. Ice or chewing gum would relieve the stuck feeling. As 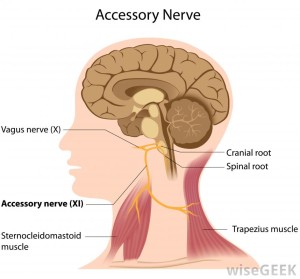 months progressed I developed bloating, constipation, swallowing difficulty, voice getting hoarse, dizziness, extreme fatigue, tongue not cooperating when speaking for a period of time, dropping things more frequently, episodes of not being able to take in a full breath, and I got to the point of only eating liquids due to the bloating and swallowing issues. All gut motility had just about ceased, or so it seemed, my stomach never made noises like it was digesting anything.
All of this has been going on for over a year.
I finally found a neurologist chiropractor. She immediately diagnosed me with vagus nerve damage. She has done some noninvasive treaments and there has been so much improvement. About the only symptom left is the �stuck in my throat� symptom, which is much better and I hope it to be fully gone soon.
So, find one of these docs and get yourself well. If I had not found her I would still be stuck on the make a diagnosis merry go round with conventional m.d.�s.
It�s truly amazing that I can sit here and type this without gum in my mouth and not feel as if I�m being strangled from the inside.
It has been a long road and at times a very scary one, but now I feel so much hope that this issues will be completely resolved.

A new method to treat Vagus Nerve Disorders is transcutaneous Vagus Nerve Stimulation. This technique passes a small electrcal current through the ear innervation of the vagus nerve.